Research on vegetation responses to the land application of biosolids has increased in the past 20 years, but there is no consensus on how plant communities respond to biosolids applications.

Biosolids are a source of nutrient-rich organic material that can be used to improve degraded or disturbed soils, but there is little consensus on how plant communities are impacted by the land application of biosolids. Here, we explored the current literature and conducted a meta-analysis using available research articles to gain a better understanding of the factors that may influence plant growth and plant communities’ responses (e.g. biodiversity) following biosolids application for grassland reclamation (including severely degraded lands). Our meta-analysis explored how site characteristics (e.g. climate) and reclamation strategies (e.g. biosolids application rates) impact plant productivity, total vegetative cover, species richness and diversity, and exotic species abundance.

From our search completed in February 2020, we found 59 papers from 1998 to 2019 with the majority of the publications after the year 2000; most of our studies were from North America and Europe (Fig. 1). The studies tended to take measurements within the first five years of reclamation with the longest observation taking 24 years post biosolids application. Most researchers applied biosolids at 100Mg/ha or less with the highest rate at 404 Mg/ha. 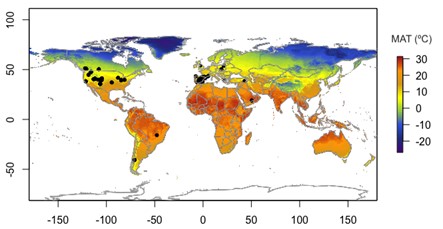 Our analysis revealed that applying biosolids for grassland reclamation generally generates large increases in above-ground productivity and vegetative cover regardless of the amount of biosolids used but had no consistent effect on species richness, diversity or the abundance of exotic plant species. Low to medium levels of biosolids application on sites with a history of a severe disturbance from mining activity, including surface mining and mine spills, may result in increased species richness, as the plant community responds to initial nutrient addition. However, restored communities can lead to increases in biomass of fast-growing species, which can result in reduced species richness at other disturbed sites.

When a site experienced a fire before biosolids were applied, plant growth following biosolids applications were reduced and shorter-lived as compared to unburned sites. Fire can have a destabilizing effect on soil structure and nutrients, and while the addition of biosolids likely aided in improving soil structure and nutrient retention on these sites, more frequent applications of biosolids may be needed to maintain plant growth on sites with a history of wildfire. Vegetative cover was found to have more positive responses to biosolids at warmer sites and when seeding was used in the reclamation process. Although seeding with biosolids application may maximize plant cover, with the potential for positive influences on species richness over time, the community trajectory of seeded communities may resemble that of the seed mix over the long term and the community may not experience the same successional patterns of nearby undegraded land.

Our research demonstrates the importance of identifying the priority of short- and long-term outcomes in any reclamation program. For example, short-term stabilization and soil rebuilding may conflict with establishment of species-diverse grasslands, especially where aggressive weeds are present. Thus, practitioners in different parts of the world must consider the prevailing climatic conditions, their site’s history, and their choice of seed mixtures when considering land application of biosolids in grassland reclamation.

There is room for further research on the optimal reclamation strategy to boost all aspects of revegetation of degraded lands, including soil fauna and mycorrhizal associations. For example, many studies do not report specific data on how different species for functional groups respond to biosolids addition or the impacts on native plant communities. This information would be useful as we seek to discern what combination of native species and plant-functional groups would be complementary within the ecosystem.